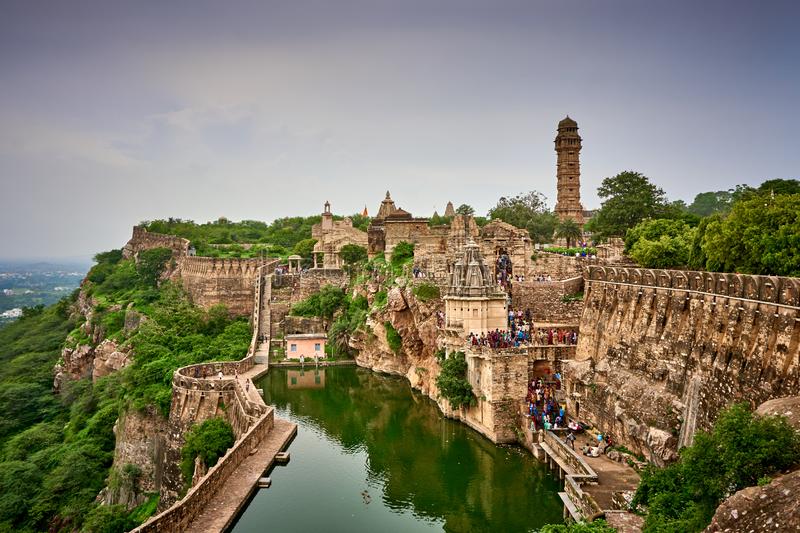 “City of Pride and Honor”
The capital of the erstwhile kingdom of Mewar, Chittorgarh is a land of forts, citadels, ruins, and immortal folklore of sacrifice and heroism. Located in South-Eastern Rajasthan, Chittorgarh is known for Chittorgarh Fort, the largest fort in India built on a hilltop, spreading over an area of around 700 acres. The magnificent fortress will always be remembered for the courageous self-sacrificing Jauhar performed by Rani Padmini to thwart the conquest of the fort by Alauddin Khilji.We have the cheapest taxi fare for Udaipur to Chittorgarh.

Chittorgarh stands at the helm of Chattari Rajput pride and is remembered in the pages of history for its glorious battles, especially the siege of Alauddin Khilji. Once known for its grandeur and opulence, today, Chittorgarh has left its tales of bravery and betrayal far behind to catch up to commercialization.

Rana Kumbha Palace is the largest structure in Chittorgarh fort, and while it is now a mere tumbledown structure of broken walls and piles of stones, it was once a magnificent three-storied palace with gigantic pillars, maze-like underground tunnels and intricately designed architecture. The most famous attraction in Chittorgarh fort is the Padmini Palace, named after Queen Padmini herself. Replete with roof pavilions and water moats, the story of Queen Padmini’s valour rings out loud in every corner of this dilapidated building. Other sights to visit in Chittorgarh include the Meera Temple, the Kalika Mata Temple, the Gau Mukh Kund, and the Bassi Wildlife Sanctuary.

DAY 1: UDAIPUR – CHITTORGARH (110 kms/02 hrs)
Arrive at Udaipur Airport/Udaipur Railway Station/Udaipur City Centre and drive to Chittorgarh, the capital of Mewar. Transfer to hotel, later visit the Chittorgarh fort one of the greatest forts in the state of Rajasthan, and also the UNESCO world heritage site. Chittorgarh fort depicts the heroic battles of many Indian warriors; another architectural marvel the Fateh Prakash Complex gives an insight in the bygone era of Chittorgarh. The city has other major places which include Vijay Stambh, Kirti Stambh, Rana Kumbha Palace, Padmini Palace and Bassi Fort.

In the evening depart to airport/station to catch your flight/train towards onward destination.

Please Note: This Tour can be customized according to your travel needs & requirement.